On the 16th October, we visited Auschwitz-Birkenau, which was a Concentration/Extermination camp used by the Nazis to hold prisoners of war, but with the main aim of killing all the Jews in Europe.  It was an interesting experience which naturally sparked a range of emotions.

We firstly visited the town of Oswiecim, which the Nazis renamed Auschwitz. It was illustrated to us at the town that 60% of the town’s population was Jewish before World War Two and the normality of Jewish lives before the Holocaust was stressed by the educators.

Following the visit to the town, we toured the first camp, Auschwitz 1. This camp was a concentration camp that was mainly for political opponents, Gypsies and other targeted groups. It was largely made up of brick barracks as well as a gas chamber which was the cause of thousands of murders.

The tour of Auschwitz 1 was followed by the tour of the second camp, Birkenau. Birkenau was the camp which saw the majority of the 1.1 million Jews who died at Auschwitz murdered. The experience was very eerie as we attempted to take in the demolished gas chambers, overly-small barracks and the train tracks which led millions to their death.

The visit to Auschwitz has very much given us a new perspective on our daily lives. It is crucial for people to continue to visit concentration camps, such as Auschwitz, as ultimately the lives of the millions of Jewish people who were murdered must live on.  It is a wake up call as to what humans can do to each other. 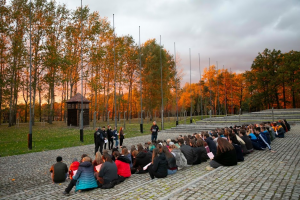