In October 2020 I entered the BBC Young reporter competition after being made aware of it by the English department. I submitted a piece on the topic of bereavement and how it impacts exam year students. This topic is very important to me as in May 2020, my mum passed away. I soon realised that there is not enough support for bereaved students like myself and that unfortunately the support that is available is under a strict time limit. I also found it incredibly shocking that the maximum grade uplift is 5% and in order to be eligible the bereavement must have occurred within 2 months of sitting the exam.

This led to me entering the competition to hopefully try and begin to make a change. Coming runner up in the national coronavirus category allowed me to be the first person to interview the new Children’s Commissioner Dame Rachel De Souza, who is willing to look further into this issue and hopefully start to make changes alongside the Joint Centre for Qualifications. She is definitely on the side of the students and wants to make sure there is enough support for pupils experiencing grief.

The competition allowed me to produce a news broadcast with the North of England correspondent Fiona Trott, who helped create the piece and allowed it to be broadcast on the national BBC 6 o’clock news on Thursday 18th March. I also had the opportunity to appear on Laura Kuenssberg’s Newscast podcast, aired on 19th March and available now on BBC Sounds (the first 5 minutes of the episode). The competition has been an incredible opportunity to experience the world of journalism and to observe what it is like to work within the BBC.

Zoe’s previous success as winner of The Telegraph’s Journalist of Tomorrow competition back in June 2020 can be seen here. 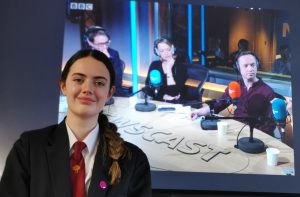