On Wednesday 10th October, we had the privilege of visiting the Polish concentration camps of Auschwitz I and Auschwitz-Birkenau. The graphic exhibitions at Auschwitz I provoked a deeper emotional understanding of an area of history we have studied throughout school, with the display of personalised suitcases bringing to life the reality of the colossal impact of the Holocaust. What was most striking was the normality of the prisoners, which exacerbated the inhumanity of their suffering. This was reinforced at the site of Birkenau, where the vast, industrial landscape encapsulated the true scale of the horrors of the Nazi regime. Walking alongside the infamous train tracks emphasised the persecution of the Nazi ‘undesirables’ as beginning long before they entered the gates of Birkenau, allowing us to pay tribute to each individual who endured the arduous selection process. Visiting the ruined gas chambers felt incredibly surreal; with the setting sun shining through the trees, it was difficult to picture the abhorrent events that the site is so notorious for.

At the end of our visit, the powerful memorial conducted by the Rabbi deeply moved each and every member of our group. His poignant speech evoked a profound reflection of the day and the history behind the sites we had visited, as well as encouraging contemplation on how we could use our experience to improve the world around us. There is perhaps no experience that could parallel the depth of understanding that our day in Poland produced, with both of us reflecting that our mission is to encourage as many people as possible to visit Auschwitz and comprehend the incomparable site first hand. 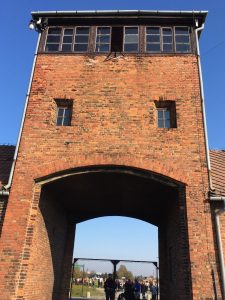