We have had a fantastic athletics season this year with such a talented bunch of athletes. We started with Year 7 and 8 students taking part in the Minor trials held at St Thomas More, many qualifying to represent Tynemouth Area. This progressed on to our highest number of students ever qualifying to represent North Tyneside at the Northumberland Championships. The Junior, Inter and Senior athletes have also had an amazing season, many representing North Tyneside at the Senior Northumberland Championships.

Huge congratulations must go to Susan Folurunso (Year 13) who will be representing Northumberland in the 100m at the English National Athletics Championships in July. This is such an achievement and we are extremely proud of her.

The Year 7 athletics team were lucky enough to meet and have their races started by Alan Bell the Chief Race Starter at London 2012 and Rio 2016. Alan is best known for starting both the 100m and 200m where Usian Bolt set world records as well as disqualifying him at The World Championships!! Alan had lots of encouraging advice for our young athletes and was able to share a few Olympic stories with them.

The photo below is of the Year 7 Athletics team with Alan Bell: 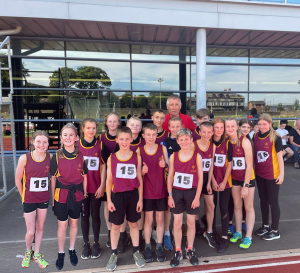