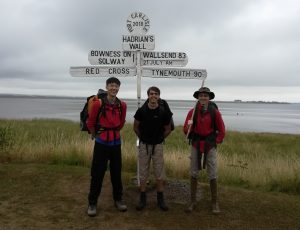 On the 21st of July 2018, three of us (Hal Dixon, Nathan Chong and Simon Rogers) set out to conquer the Hadrian’s Wall Path. Our aim was to walk it in four days to raise money for the Red Cross’ efforts in Myanmar/Bangladesh for the Rohingya refugees.

On Day 1, we drove over to Bowness-on-Solway and began walking at 8am, our spirits high. We completed the entire first day of the 2017 walk in three hours, beating our time the previous year by two hours. Our route lead us past Carlisle Castle, along the River Eden and up to near Carlisle airport, where we set up camp at 6pm at Bleatarn Farm, having walked 21 miles.

Day 2 began, and we encountered roadblocks of militant cows, steep inclines, a vexillation of Roman reenactors and a fearsome night hike along Hadrian’s Wall’s highest points. It proved hard work, with Simon’s feet taking a battering, bearing seven of the eight blisters in the group. After a distance of around 22 miles, we established a wild camping spot off the beaten track near Steel Rigg, where we left no traces.

Day 3 proved to be much of the same, with more steep hills but less militant cows. We passed well known locations on the wall such as Sycamore Gap, Housesteads Roman Fort and Brocolitia Mithraeum. The terrain levelled out near the end, and Simon replaced his footwear, giving him a great boost. After around 23 miles, we arrived at Hal’s grandparents’ house on the Wall Path around 7pm, where we were well cared for.

The final day saw us speeding towards the endpoint at 5am, walking to Newcastle, where we were much unused to the bustle of the city after spending much time in rural Northumberland. From here, we carried on to Segedunum, and upon nearing the finish, we broke into a spontaneous sprint. With the official path ending at Segedunum, we took the metro to Tynemouth where we met another student, Luke Haughey, who presented us with the Red Cross cheque.

In total, we raised £1121.25 for refugees fleeing for safety from Myanmar. 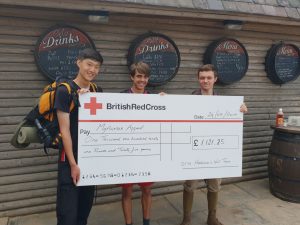