On Saturday 11th September I competed in the British Triathlon Inter Regional Championships at Mallory Park, Leicester. Each region, including the North East, select their best 8 girls and 8 boys from the area and they compete against the 13 other UK regions such as Scotland, Wales, East Midlands and Yorkshire.

Triathlon is where you swim, bike and run, with transitions in between as part of one race. As I’m in the younger age group we did an Aquathlon which is a swim/run. We had to do heats and finals of a 300 metre open water (lake) swim and 1.2 kilometre road run.

After a short rest we raced again in the finals. I came out of the swim in 4th place but had a good transition and set off 1st in the run. A few girls tried to catch me but I ran well and held them off to win the A final making me GB champion for 11-12 year olds. It takes a lot of training and work to compete so I’m very happy with the result. I would encourage anyone to give it a try. 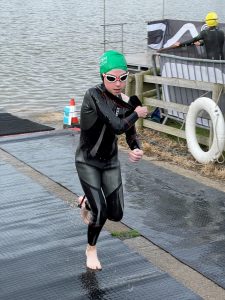