The Holocaust is a piece of history known around the world for the murder of six million Jewish men, women and children by Nazi Germany and its collaborators during the Second World War. However what has perhaps been lost is the humanity of those victims. Over the course of several weeks I was able to gain a more in-depth understanding of the Holocaust during the Lessons of Auschwitz Project with the Holocaust Educational Trust, where I got to see the victims as individuals not just statistics.

During the course I took part in three live sessions as well as self-guided modules, all with the intention of expanding my understanding of the Holocaust. What was emphasised throughout was that those murdered across Europe were all members of a community. They all had families and interests, like the people of Oświęcim, the community that eventually became Auschwitz 1. Each person had a separate life before the camps.

One of the most memorable moments in the course was when we had the privilege of listening to Eva Clarke’s testimony. Her mother, a Jew, spent time in Theresienstadt, where she had a son who tragically died of pneumonia before she was sent to Auschwitz. On a coal wagon on the 29th April 1945, Eva Clarke was born before entering Mauthausen, a concentration camp in modern-day Austria. What stood out to me was how narrowly Eva and her mother, Anka, avoided death on several occasions. During her testimony, Eva pointed out firstly how if her brother had not died before her mother’s arrival at Auschwitz then Anka would most likely have been sent to the gas chambers; as most women with newborns were. Secondly, on the 28th August 1945, the Nazi’s ran out of gas for the chambers. The day after, her mother arrived at Mauthausen and gave birth to Eva. .

Eva’s story was reflective of a lot learnt throughout the course; it brought forward just one of millions of stories. Through hearing it I was able to understand another perspective of the events we hear about in History lessons. I hope sharing some of it with you helped you to understand that we can sometimes get lost in the facts and numbers of the Holocaust, and in order to truly remember, we must see these people as individuals rather than faceless victims.

The image below shows the town of Oswiecim, Poland before the Second World War, depicting how before it became Auschwitz 1 it was a community like any other, with social events and a plethora of cultures. 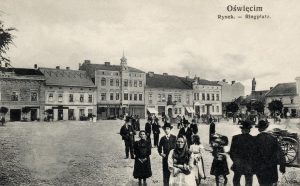