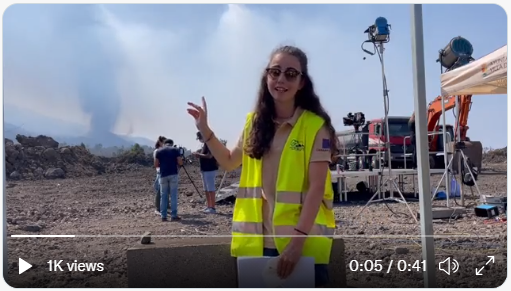 UPDATE: On Thursday 30th September, Rosie joined a number of staff and students from St Thomas More for a chat about the latest on the eruption and her thoughts on it.  A short video of part of this chat is below:

Rosie Rice is one of our ex-pupils, currently studying Geography at Cambridge University.  This summer she took part in an internship with GeoTenerife, studying the volcanoes and based on the island of Tenerife.  During her time there, one of the other Canary Island, La Palma, started erupting.  Rosie was lucky enough to be given access to this volcano, and on Monday 27th September we managed to catch up with her live from Mirador El Time, a viewpoint overlooking the Cumbre Viejo volcanic eruption.  Year 13 students, currently doing fieldwork in the Lake District with Mr Murray and Mrs Law, were able to put their questions directly to Rosie about her experience of the volcano and the impacts that she has seen. 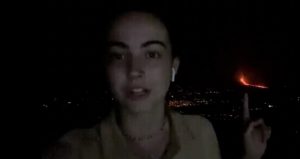 Rosie explained that she had been coming to the end of a 4 week Internship with @GeoTenerife, based on the island of Tenerife, which was supposed to finish on 24th September.  On one of her days off near the end of her time there, she discovered that there had been a huge amount of seismic activity on one of the neighbouring islands La Palma, then she spotted on social media that it had erupted.  She decided that she had to get to La Palma to report on this eruption.

Rosie got to La Palma on Saturday, and has been doing her best to report on the volcano through social media.  She is particularly interested in the way that the volcano is being reported on, and one of the elements she is studying is the way that disasters are reported.  The way that social media can work as a positive, giving a voice to anyone who has an opinion, can be fantastically positive, but also can be social media’s potential downfall.  Reports of significant global secondary effects, such as a mega-tsunami, have been widely reported on in the media despite the fact that there is little to no chance of this ever happening, and certainly no suggestion of it happening during this eruption.  Rosie has spoken to people in the USA, who have been following this story, and who are very concerned.

Rosie is in the preliminary research stage of her undergraduate dissertation, which was going to be on an historical eruption of a volcano in North Korea.  However, in the past 24 hours she has changed her title to study the changing risk perception of the people of La Palma, based on the interviews she is currently conducting with local people on the island.  Rosie reports that it is humbling to be there in her capacity as an observer, but witnessing those people who have lost everything.  She said that it really puts into perspective those remote figures that you might regurgitate in an essay about houses destroyed and evacuations, when you see the people coming up to the viewpoint they are reporting from, asking to borrow their binoculars to see if their house has been destroyed by the lava flow.

Through her interviews so far, Rosie believes that the current eruption will have a significant impact on people’s perception of risk in La Palma.  Clearly people do live with the risk of eruption, building their banana plantations on top of old lava flows, but the most recent eruption until now, back in 1971, was far smaller and caused less damage.  Rosie thinks that after this eruption people may feel differently about the risk.  She did however comment that despite the life-changing damage being done on the local scale, this eruption only only covers far less that 1% of the island, and shows no signs of impacting any wider area.  She pointed out that this awareness of scale was a key thing to remember for our current A Level students writing their essays.

Rosie has been live on Instagram over the past couple of nights, taking questions from members of the public on the volcano.  Videos of these streams are available below: 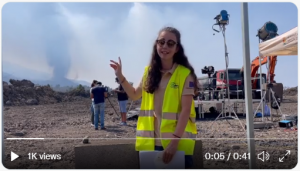 The display, that has just gone up in Geography, was researched by our current year 13 students, and explains a little more about this volcano.  Please feel free to drop in at Geography to take a closer look. 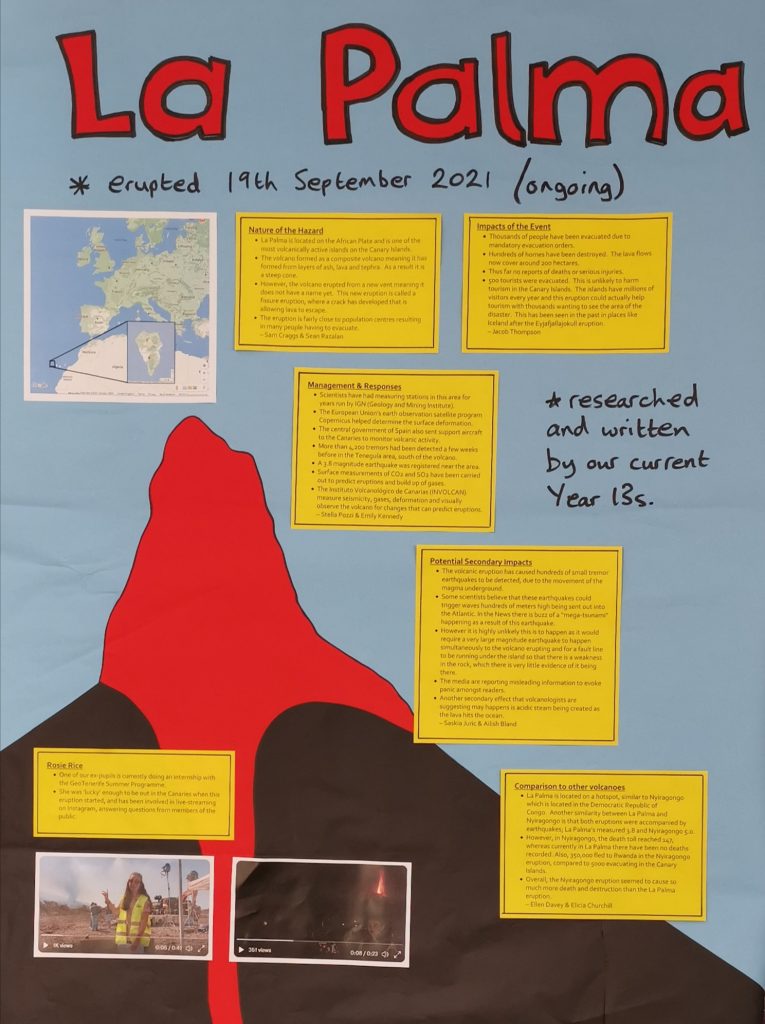