On the 20th November, Alex Adderley (Year 12), Caitlin Pang and Joe Goodacre (Year 13) and I (Year 12) represented the school at the Regional Team Maths Challenge finals for UKMT at Gateshead Emmanuel College. It was there that we competed against nineteen other teams from different sixth forms, all sending the best mathematicians each school had to offer.

Emmanuel College was friendly and accommodating to all the schools by offering free food and escorting people to where they needed to be.

The first round was a simple team challenge where we had 40 minutes to answer 10 questions. It was probably the best round our team performed on, getting 9/10 questions correct.

The second round was pretty solid as we split into pairs in order to complete a crossword, with one pair handling the ‘down’ numbers and the other pair tackling the ‘across’ numbers. We did pretty well on this task.

The third round was by far our worst round; it was a pair shuttle round where each pair used the answer from the other pair’s question to find the answer to their question and vice versa. We started off alright but did terribly near the end.

Out of the twenty teams, St Thomas more nabbed a respectable eighth place; we were really pleased with making it into the top half. It was certainly a great experience, though doing this high level of Maths for a whole afternoon was pretty tiring. 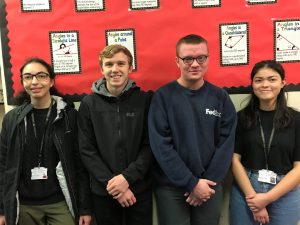