Last week I competed in the TeamGym English Gymnastics Championships which was hosted at Benfield Gymnastics Centre. I competed in the team event, where all of our scores are added up together. My team, City of Newcastle Gymnastics, includes ten people and we competed against teams from all across England, including teams from as far away as Portsmouth and Scarborough. My team and I had a successful competition and were announced as TeamGym English Junior Champions 2022.

There are three sections of apparatus which we compete on including the tumble, trampet and vault, as well as the floor routine. On the floor we all competed a synchronised routine to music, where we had to be in time for the full routine.  This can be difficult when trying to land skills at the exact same time. We scored the highest floor score of the day. On trampet and vault we completed difficult skills such as double somersaults, which require a lot of speed and strength and can be very difficult to land. We also scored the highest scores on tumble and trampet for our age category.

The team had been working up to this competition for a full year and the hard work paid off. We are now working hard to get ready for competitions next year including the British and English Championships. 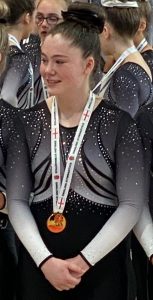