Year 13 English students take a trip to the capital

On Wednesday 27th November, Year 13 English Literature and Language students took the train to London for a three-day cultural trip, in the good company of Mrs Thain and Mrs McHugh. We hit the ground running visiting Shakespeare’s Globe as soon as we arrived, with a costume demonstration, where Charlotte Rea and Jen Devine volunteered to dress-up as both upper and lower class Shakespearean women. This was followed by an impressive sword fighting demonstration; we learned about the different swords used in Shakespeare’s plays and why they were used. We met Kaja, a wonderful academic; all of us (especially Mrs McHugh!) fell in love with her, and her literary knowledge. She gave us a tour around the Globe Theatre, basing it on the play ‘Othello’, which Literature students are studying. After this eventful tour, we took a trip down the South Bank for a delicious meal together, and got into the Christmas spirit, visiting one of London’s many Christmas markets.

The following day, Literature students attended a conference (with Mrs Thain) on World War I, which plays a key role in their A-Level course. The conference included talks from a chief examiner, a historian, and Literature academics, which Literature students will find extremely helpful in the lead up to their exams. The Language students took part in a walking tour of London with Mrs McHugh, exploring many famous landmarks, such as Westminster Abbey, Houses of Parliament, Buckingham Palace and Trafalgar Square, and visited the National Gallery and British Museum, where we sneakily analysed a few noun phrases in the museum literature!  Later that evening, we all enjoyed a Christmas meal in Covent Garden, which lasted longer than we expected – and in order to get to the theatre on time (or three minutes late), we had to run across Leicester Square in the rain, getting lost and ending up at the wrong theatre. We finally arrived at the West End’s Ambassador’s Theatre, where we all saw a brilliant performance of ‘Ghost Stories’ – it definitely spooked us all, and Mrs McHugh ended up on the floor; we’re uncertain if we all slept well that night, but it was definitely worth it!

On our final day, we were gutted to be leaving. We visited the British Library and were fascinated by the collections held on old Suffragette documents, the original copy of the ‘Canterbury Tales’, and of course, Wilfred Owen’s famous poems. In the afternoon, we paid a visit to Camden Town, and were enriched by the ‘London culture’, visiting the delicious food stalls and ‘peculiar’ museums.

It has truly been one of our highlights of studying English in Sixth Form. We’d like to thank our lovely teachers for taking us, and for never taking themselves too seriously! 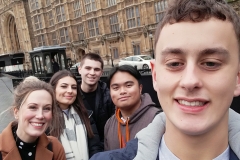 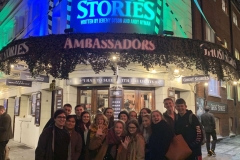 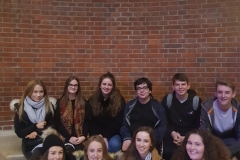 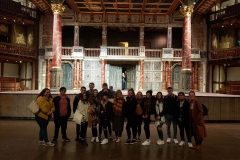 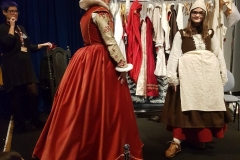