It was a Saturday morning and North Tyneside were in the county Final. We took a mini bus from John Spence to Longbenton Sports centre and we were all smartly dressed in our uniforms. After we got off the minibus, we went into the changing rooms where all of our kit was hung up for us. Everyone was really excited; we were jumping up and down as the music boomed in the background. We were all in the mood for a win. A few minutes after getting changed, we went out to the pitch to get warmed up for one of our biggest ever games. Our hearts were pounding. Back into the changing rooms, after our warm up, we were given the most important team talk of our lives.

The whistle blew and the game had started. Coming up to half time, it was our corner and it was scrappy in the box but North Tyneside managed to put the ball in the back of the net. The half time whistle blew and it was time to rest. Towards the end of the second half, all of our hearts dropped… a penalty to Newcastle to put the score even. We couldn’t watch but our keeper had saved it and we were jumping with joy, all running over to hug him for it! At the end of the 10 minutes of added time, the whistle blew. North Tyneside had won the Cup Final. It was a massive achievement. We all went to collect our medals and then headed off to the changing rooms where we all celebrated so much. It was one of the best days of our lives and we will remember it forever.

The boys are pictured above and below, Casey on the left, Harry on the right. 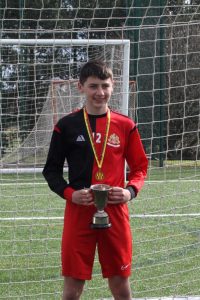 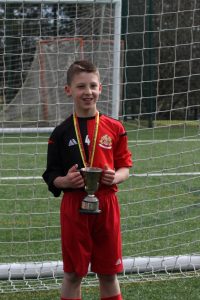