We were surprised and humbled to receive the Helen Bates Award. Although this award is presented annually to two Year 11 students, we were not told about the award until the day of the assembly. This is because, when the criteria for the award was being drawn up, Helen’s family wanted it to be for students who go about their daily business doing what comes naturally to them and being good citizens.

After being presented with the award, we had the opportunity to talk to Helen’s daughter. We learned that Helen was one of the early intergenerational volunteers who gave up her time to support and be supported by students at St Thomas More. She was a great advocate of young people and would correct anyone who believed in the negative stereotypical image often portrayed in the media about the younger generation. After Helen passed away in 2005, teachers and Helen’s family worked together to create the award in her memory. Now in its 13th year, we follow in a long line of past winners, which makes us feel modestly proud and committed to following in Helen’s example of “selfless giving”. 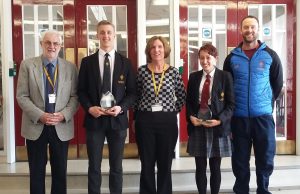