We enjoyed our final day in Iceland. We started off by visiting an earthquake stimulator; at 6.6 on the Richter scale it was thrilling.  After that our tour guide took us to a Viking ship that is nearly 30 years old, but looks brand new.  Most of us then tried the famous hot dogs that Bill Clinton ate 3 of when he visited Iceland, we also went to the dome and took in the most amazing view of the snowy mountains.

Later we travelled to the Hallgrímskirkja church and listened to the choir, which was very different to our choirs in the UK.

To finish off our adventurous day we visited the mud flats that were not the best scent (it smelled like egg), but we took the opportunity to hike up the large mountain and take in the beautiful views of the lake.

After the lava centre we had the chance to visit some waterfalls, one of which (Seljalandfoss) we were able to walk behind. It was really exciting to see the waterfalls even though we got a bit wet. Once we saw the waterfalls we went to see the Solheimajokull glacier, it was very interesting to see how far the glacier has travelled throughout the years and how climate change has affected it.

We then went on to the black sand beach near the town of Vik, where we took some pictures and walked around. After that we stopped in the town where we went into a cafe for a drink and in a supermarket to buy some snacks.

We then went back to the hotel and had tea. Once we had tea we had the opportunity to go into the pool, hot tubs and go on the slides, it was really fun.

by Amy Tasker and Gracie Davies

It was an early 9am start and it was still pitch black, but everyone’s spirits were still high and they were looking forward to the day.  The first location was the Þingvellir National Park where we saw a beautiful waterfall; everyone took group photos and we stood in the gap between the North American and Eurasian plate margins.

After another hour’s drive, we visited an extinct volcano to walk around the rim. We all enjoyed the view of the red and orange rocks and the big pool of water in the middle.

Once we had walked the circuit round the rim we got back on the bus to visit the geysirs. As we walked to the big one (Stokkur) it went off and we were soaked from the big cloud of mist that comes out. Everyone was standing, phones at the ready to film the next eruption. It took quite a while and the sulphur stank of egg, but eventually it went off again and most of us managed to get it on video. The cloud of mist in this eruption drenched us all again so we were all very cold when we got back to the bus.

After the geysirs we visited Gullfoss Waterfall where we were stunned by it’s beauty; even though it poured down that didn’t ruin the day or the view. We were all drenched but got back on the bus and travelled back to the hotel.

About 7:30pm we all jumped in the pool and went in the hotel’s two hot tubs.  It was a lovely way to end an adventurous second day.

It was a 12:15am start when everyone gathered at school to catch the bus to Manchester Airport, forty students and four teachers waved goodbye to parents and carers. The bus journey to Manchester Airport took around 3 hours, and we had four hours before the flight to Iceland. In this time we wandered round the shops and had time to relax.

The flight to Reykjavik was a calm and steady journey, with everyone catching up on their lack of sleep!!

Once we were eventually in Iceland, at around 10:45am, we got on the coach and visited the impressive Tectonic Plate Margin, which is the space between the Eurasian Plate and the North American plate.  Shortly after this, we went to the world famous Blue Lagoon. Here we were provided with face masks and free drinks, and enjoyed the breath-taking beauty around us, with the wonderfully warm water and two hours to spend with our friends.

The next stop was the lighthouse, were we were given a detailed description by our Icelandic driver/ tour guide.

By 5pm, we were all very tired and ready to go to the hotel to get some well-needed rest! 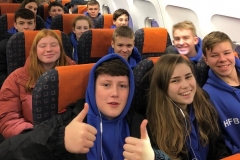 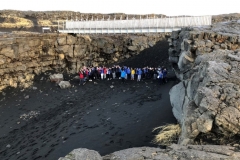 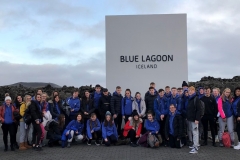 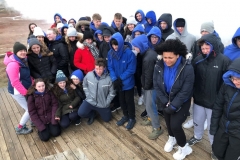