Lent is our time to come together for the world’s poorest children. So for our Lenten charity this year the students of Year 7 at St Thomas More RC Academy, North Shields worked to support the wonderful charity which is Mary’s Meals. Their vision is that every child should be able to receive a daily meal in their place of education.

Mary’s Meals is a charity born from humble beginnings. Their founder Magnus MacFarlane-Barrow grew up in Argyll, Scotland. In 1983, a pilgrimage to the Marian shrine of Medjugorje in Bosnia-Herzegovina renewed his family’s Catholic faith and led Magnus’ parents to convert their guesthouse into a retreat centre or ‘Family House of Prayer.’ The charity is now a global movement. It is in their founder’s own words ‘a series of little acts of love.’

The student’s efforts all began by being introduced to the story of Mary’s Meals; emphasising with their needs; watching ‘Child 31’and being led by Mr Murray in the various ways they could make a difference with selfless acts of love and kindness. The response from all our students was simply overwhelming.

Over the course of the following few weeks the students themselves bought and filled 40 rucksacks with all the essential items children need to succeed at school – from pens, pencils and notepads, to clothing, sandles and toiletries. To achieve this wonderful feat they fundraised over £1200.

In addition we enjoyed a ‘film night’ at school. Students paid £1 entrance then bought hot dogs, soft drinks and sweets whilst socialising with their friends. Individuals made and sold cakes; one form class even completed a marathon round the school fields. Together they raised a further £850.

To recognise all of the students amazing efforts we ended the term in the best possible way by celebrating Mass. Mass was offered in thanks for our student’s acts of love and for all those children less fortunate than ourselves. Students read, sang and were an absolute credit to the school and themselves. 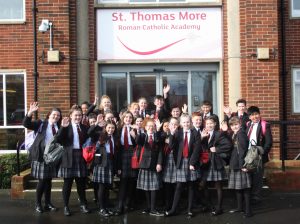